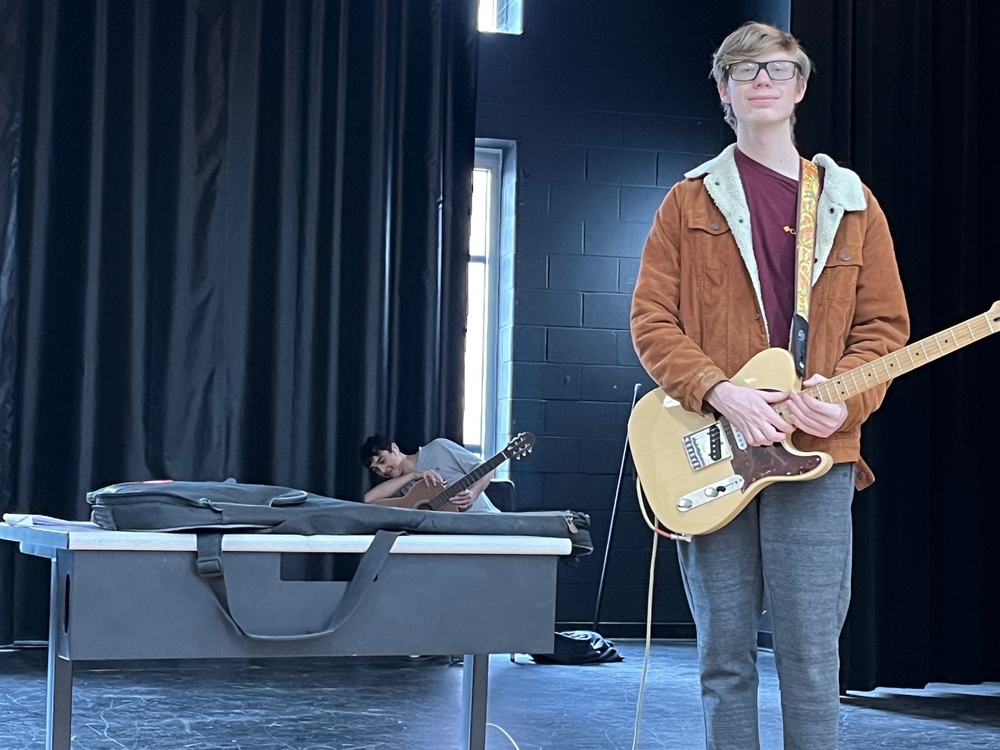 Whether a skilled musician or a beginner, there’s a class that’s just right for any Bethel-Tate High School student with an interest in developing their musical talent.

The class Instrumental Studio is offered near the end of the school day. There you can find, for example, a novice instrumentalist maybe learning a chord on a guitar working alongside a seasoned guitarist looking to fine tune their technique.

Anything is possible in the class taught by high school music teacher Samuel Blair. Instrumental Studio is just one of several classes he teaches during the course of any given school day. His other classes are Band, Choir, Music in Film, and Music Appreciation. Each of these classes is structured with teacher driven lesson plans and assignments.

Students who participate in Instrumental Studio, using student-written goals based on the SMART model, establish what they want to learn and achieve over the course of a couple weeks and for each quarter. Their grades are assigned based on the quality of their goals, their progress on meeting those goals, and assessment of those goals. At the end of the quarter, they perform a recital before classmates where they can demonstrate the skill or skills they have mastered and receive constructive feedback from Mr. Blair and their peers.

Mr. Blair treats the class like an independent study. To say there's a syllabus or curriculum is misleading because the students are each working on their own project.

“I oversee the projects and make sure that they are doing what they need to do in preparation for that recital,” he said.

Sophomore Peyton Foster is an experienced guitarist. He’s been playing for six years and often plays at his church. For him, the class offers an opportunity to further hone his techniques. He also appreciates the feedback offered by his classmates.

Freshman Ethan Wood takes private drum lessons. The class gives him access to a decent drum set where he can practice some of the stuff he’s learned during his lessons. This allows me to relax once I get home, he said.

Junior Nick Burns likes the production side of music. The class gives him access to technology he can use to mix tracks and make new music. He hopes to get even better at mixing and editing.

Sophomores Emily Willis and Kaylee Hughes are both vocalists who also play instruments.

Emily plays the guitar, piano and trumpet. “I love music a lot and I like to have something driven toward learning piano and guitar and mixing in vocals,” she said. Instrumental Studio gives her access to Mr. Blair and other student musicians who can help her with technique.

Kaylee, who also plays the piano, said the class gives her a “safe space to improve on my musical abilities and get feedback.”

Instrumental Studio is a unique class, Mr. Blair said. He’s not seen another like it. When he came to Bethel-Tate High School four years ago, he said the class was already established with a focus on ensemble performance, specifically percussion. He has refined and transformed it.

Today, the program is about learning to set goals and working to achieve them. And the goals differ based on each student’s interest and ability. This makes it truly unique and beneficial for all students.