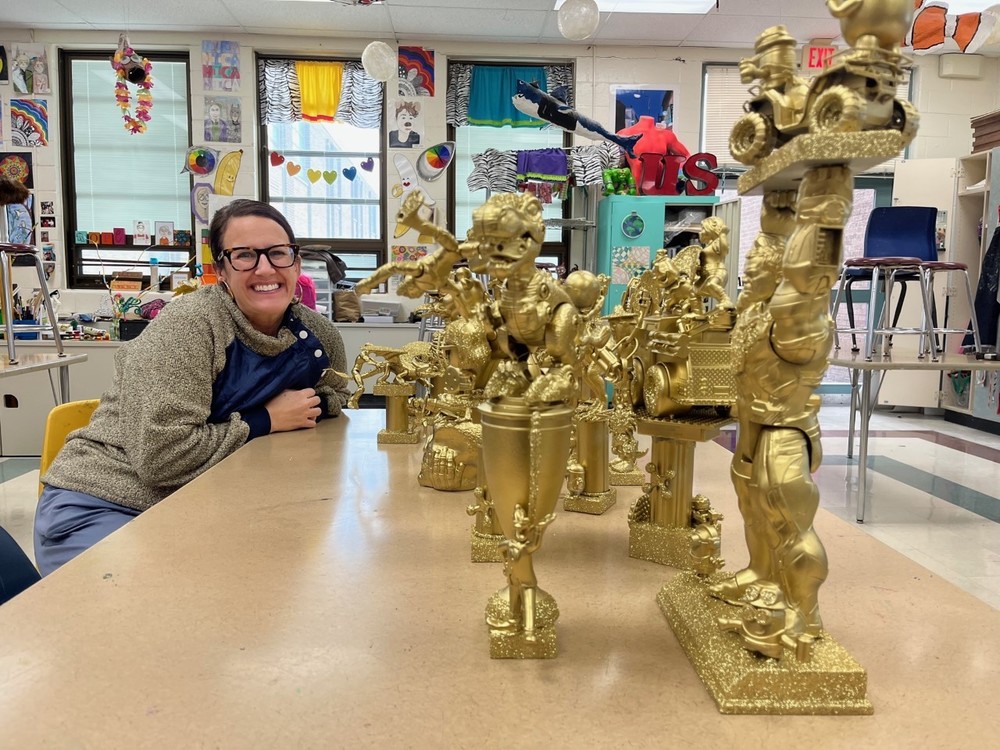 It’s the day before the first-semester awards assembly at Bethel-Tate Middle School. In the classroom of art teacher Jamie Lewis stands 14 sparkling golden statuettes - awards for students who demonstrate the Tiger Way.

The Tiger Way is the nationally recognized Positive Behavior Intervention Supports program at Bethel-Tate Middle School. The program emphasizes being respectful, being responsible, and being a problem solver.

Like the Tiger Way program, the statuettes are unique and prized. Each is handcrafted with love by Mrs. Lewis using pieces from broken trophies, toys, gold paint and glitter. Lots of glitter.

Mrs. Lewis launched her teaching career at Bethel-Tate 16 years ago. She’s been designing and building awards and presenting them to students for 15 of those years. So far she’s created/awarded over 360 statuettes.

“I remember thinking that I wanted to give out some sort of award,” Mrs. Lewis recalled. “And I wanted to make it fun and artsy. I don’t know how I came up with the idea. It just popped into my head. And I thought 'you know what, I’m going to get tons of toys and I’m gonna put them together and create some sort of trophy' and it worked into this.”

Initially, she collected old trophies from thrift shops and purchased toys from a popular consignment shop. Eventually, the project became kind of expensive, she said. That’s when she began asking for donations of toys and unwanted or broken trophies. It’s an ask that’s been answered repeatedly by students, parents, staff and community members.

Just after Christmas this year, she posted her need for toys to her subdivision’s Facebook group. As a result, she now has a box overflowing with toys.

Over the years, the statuettes have become prized awards for students. To receive the award, students need to earn them.

“I pick one student per class that I feel goes above and beyond on every art project. I tell them that it does not have to be the most artistic who gets it. It could be a student who has no artistic ability but somebody I feel tries their hardest,” she said. “We have a motto at Bethel-Tate Middle School, follow the Tiger Way. It’s a student who follows the Tiger Way who earns an award.”

Making and presenting the awards brings her joy, she said, because I know that some of the students who receive them might not receive other awards. They might not be the most athletic kid, or a top academic student.

“I had one girl come down two years ago and gave me the biggest hug,” Mrs. Lewis recalled. “She said I’ve wanted this for three years. She was an eighth grader. It’s those moments that just make it all worthwhile.”